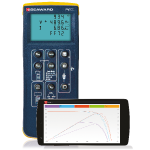 Regular inspection and testing of a Solar PV installation not only qualifies that the system remains electrically safe for continued use, but that it operates as efficiently as originally intended.

The IET guidance note (Code of Practice for Grid Connected Solar Photovoltaic Systems) provides engineers with a more user-friendly approach to installing and maintaining a PV system than that of BS EN 62446; the international standard upon which the guidance note is based.

Following a formal visual inspection, it is required that the DC section of a PV installation is electrically tested. BS EN 62446 summarises the following minimum test requirements:

- Test of the insulation resistance of PV string and array circuits

The above tests can be carried out using an array of test equipment; a low resistance ohm-meter, a insulation resistance tester, a voltage tester and a DC clamp meter. Generally considered low in cost, each of the instruments will need calibrating annually to comply with MCS requirements, ultimately adding to cost of ownership. There is also a fairly large risk of user error, with multiple instruments having to be connected into the circuit at different points to obtain measurements.

For a while now, Seaward Solar have been in the market with their revolutionary all-in-one PV array tester, the PV150. The instrument simply connects at a single point within the PV circuit and can carry out all of the tests described above at the push of a button. The PV150 is key for straightforward, fast installation testing and can connect to a PC in order for test results and reports to be professionally printed and ‘handed over’ to a client as required by BS EN 62446.

However, there are certain limitations with the PV150. Section 16.4 of the IET Code of Practice for Grid Connected Solar Photovoltaic Systems details additional tests that may be conducted for larger solar PV installations and for ongoing maintenance and troubleshooting. One such ‘additional’ test to be officially confirmed in the next edition of BS EN 62446, is IV curve testing.

Solar IV curves show the current and voltage characteristics of a particular PV cell, module or array; the benefits of IV curve testing are significant. In addition to measuring the short circuit current (Isc) and open circuit voltage (Voc), curve testing also measures all of the operational points in between these values, including the current and voltage of the maximum power point (MPP) and hence the maximum power value itself. The shape of an IV curve can be assessed to diagnose performance issues in ways that traditional test methods cannot. Moreover, the maximum output-power rating for individual PV modules or strings can be obtained without an inverter installed in the circuit.

This is where Seaward’s latest solar installation tester comes into play. Although the Seaward Solar PV200 IV Curve Tracer looks very similar to the older PV150 and can similarly conduct one-touch-testing of a solar installation, it can also quickly capture IV curve data in accordance with IEC 61829.

Test data recorded by the PV200 can be wirelessly downloaded into Seaward’s free PVMobile app using an Android device, where detailed IV curves can be instantly viewed - even in the field. The app features a large database comprising solar PV manufacturer’s STC data that can be used to compare the measurements recorded by the PV200 to check that PV cells are still performing within the specifications originally intended. The displayed IV and power curves can also be used to identify and solve common problems including solar cell shading, high resistance connections and defective cells.

A recent survey conducted by Seaward proved out of 225 contractors, nearly two thirds anticipated the need for an IV curve tester within the next 3 years, and over half thought that it was important to have the ability to conduct IV curve testing within a PV diagnostic tool. These figures highlight the convenience of owning an all-in-one testing tool, and it may just be the correct time to invest in a Seaward PV200 in order to offer new or existing clients an annual health check on their Solar PV installations.