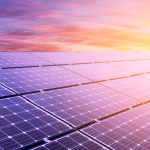 Solar panel installations are becoming increasingly popular from both a private, commercial and governmental perspective amid a fall in installation costs and a long-term price rise in non-renewable energy sources such as coal, oil and gas. However, solar panels require regular maintenance, which is where thermal imaging can provide an efficient solution to many of the challenges posed.

All solar panels are glass plated which causes a practical issue for thermal imaging as glass is not completely transparent in the infrared spectrum. Instead, a thermal imaging camera will only detect the temperature conditions of underlying cells through the glass screen so thermal sensitivity of ≤80mK is required.

For longer distance measurements, a high-resolution camera with a thermal resolution of 320 x 240 pixels or even 640 x 480 pixels should be used and it is often appropriate to have a long-distance lens of 6˚ or 14˚.

Solar panels are a common site on rooftops and in larger facilities such as solar farms. With active troubleshooting and proper maintenance, solar panels can produce electricity for many years and a thermal imaging camera provides a great way of checking solar panels quickly.

However, it is important to identify appropriate conditions before an inspection so that there is sufficient thermal contrast to locate faults. Solar irradiance levels – measurable with an irradiance meter – should be above 500W/m2 and preferably above 700W/m2 and the lower the outside temperature the better.

Damp or wet conditions will also adversely affect results because water will cause false anomalies in a thermal image. Cloudy and windy conditions are also to be avoided if possible.

Before Starting a Solar Panel Inspection

One of the great advantages of thermal imaging is that there is no need to disconnect solar panels whilst performing an inspection. Anomalies are clearly displayed on the thermal imager’s screen as part of a crisp thermograph that is relayed to the user in real time, although the user must set a manual range based on the highest and lowest temperatures on the solar panel in order to emphasise any differences across the cells. The actual temperatures can be determined using an IR thermometer.

A peculiar property of glass is that emissivity depends on the angle of incidence from the position of the observer. Reflectance is higher at 90˚ so, in order to avoid a reflection of the thermal camera and operator, the user should be at a maximum angle of 85˚. However, extreme angles lower than 30˚ result in too-high emissivity so observations should be from a minimum angle of 30˚. That gives a 30˚ to 85˚ observation angle. To help negate the problems associated with front-facing inspections, it is possible in some circumstances to perform an inspection from the rear where there is no glass covering.

What to Look Out For

Figure 1 shows red spots where faulty interconnectors have resulted in a module or string being hotter than its surroundings.

Figure 2 shows a single hot spot within a cell that often indicates physical damage to a cell, moisture ingress or grime. 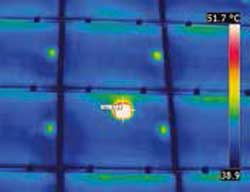 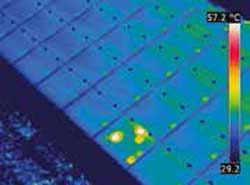 As these problems can clearly be shown on screen, it makes it easy to scan large installations quickly. However, thermography only provides indicative results and a full electrical inspection must be carried out for confirmation. Nevertheless, thermal imaging should be the first port of call when checking new or existing solar installations.