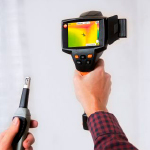 Mould is a widespread problem affecting old and new buildings alike, particularly when new windows or doorframes are fitted retrospectively. Thermal imaging can be used in conjunction with humidity and air temperature measurement to detect mould-friendly conditions before a serious problem develops, thereby protecting the health of occupants and workers as well as lowering costs of remedial work.

What is Mould and How is it Formed?

Mould is the common name for a wide range of different fungi that naturally exist around properties and sit on wood, plaster, carpets, and upholstery. In unfavourable conditions, the fungi will not sprout and will sit in a dormant state but the presence of enough moisture will allow the spores to grow and then form mould patches in a variety of colours depending on the fungus species.

Why is Mould a Problem?

The main reason why mould is a pressing issue in a property is its inherent risk to human health. Although many people live quite healthily in properties with mould, mould can have a negative impact on the health of those with breathing issues, asthma and other allergies as it irritates the user’s lungs when breathed in.

Additionally, mould fungi produce mycotoxins that are toxic to humans and extended exposure weakens the immune system and can lead to headaches, irritation, coughs and general allergy-like symptoms.

The presence of mould also indicates an issue with ventilation or other problems such as cold bridges, high humidity and moisture damage. It is therefore imperative that mould-friendly conditions are spotted early.

Thermal imaging provides a unique insight into the temperature conditions in a room which is perfect for discovering mould-friendly conditions. Firstly, a thermal imaging camera can detect hidden temperature patterns where leaking pipes are causing excess moisture. This has been previously been discussed in our blogposts discussing both water leaks and underfloor heating.

In addition, thermal imaging can be used in conjunction with a humidity tester in order to locate mould danger caused by poor ventilation, high humidity, cold bridges or other factors. By scanning a room with a thermal imager to detect the different thermal patterns (often showing up as colder) from moisture, any anomalous spots can then be properly investigated.

This simply involves checking the air temperature and humidity around the cold spot before measuring the area’s surface temperature with a thermal imaging camera. Using a thermal camera and hygrometer in tandem is therefore the quickest way of checking for mould danger spots in a property and allowing early remedial action such as repairing ventilation systems, improving air circulation, or fixing cold bridges.

Notably, the Testo 875 and 885 can be supplied with a wireless humidity probe and can then provide a thermal image of a room with mould risk highlighted in traffic light colours.