A brief history of Ducters and low resistance testing 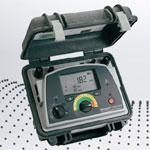 The word DUCTER was registered by Evershed & Vignoles in 1908 – a shortened version of ‘conductor tester’ that has since evolved into an adjective; similar to HOOVERing a floor or MEGGERing an electrical cable.

Ducters - or low resistance ohmmeters - differ to standard ohmmeters in the way that they generally utilise four test leads, as opposed to two. Two of the leads form a path for large amounts of current to flow across a resistor (sometimes up to 600A), where as the other two leads simultaneously measure the voltage across the resistor – the displayed result simply an electronic calculation of resistance using Ohm’s law.

Low resistance ohmmeters are used for many different applications, not all typically electrically biased. More bespoke applications include aircraft manufacturers who will use a ducter by connecting the instrument to an aircraft, whilst stressing the airframe mechanically to simulate the forces experienced when in flight in order to identify any weaknesses within an airframe.

They are also used by underground/subway train manufacturers, who need to assess that the resistance of a carriage bogey is low enough to carry effective signals in order to broadcast a train location to a central signaller.

However, they are more typically used on a daily basis by electrical engineers in order to complete maintenance and commissioning tests on HV circuits, switchgear, busbars and circuit breakers. Not only to confirm safe operation of equipment in the event of a fault, a ducter can be used to qualify that an electrical join is of a low enough resistance as not to cause power loss through unwanted resistance.