Use reward points to get money off future purchases.

Please note: Customers must be signed into their account to be elegible. Find out more about reward points here.

Found this product cheaper & in stock somewhere else? Give us the details and we'll endeavour to match the price.

We offer FREE standard delivery on all orders over £249, with a range of next-day options also available on many items.

Find out more on our delivery information page.

We want our customers to be fully satisfied with the goods they purchase from us, offering returns for up to 60 days.

Need Some Help From Our Experts?

We're always happy to offer help, information & advice to find the right instrument for you, so please get in touch.

Spend over £1,000 on eligible Teledyne FLIR products and choose a free gift direct from the manufacturer.
Offer valid on purchases made between 1st July 2022 and 30th September 2022. Please click the banner above for more information.

The Teledyne FLIR One Pro LT Smartphone Thermal Camera is low cost device designed to turn the user’s Android or iOS smartphone into a thermal imaging camera. A clear thermal picture is produced by the camera’s 80 x 60 pixel thermal resolution and the temperature measurement range of -20˚C to 120˚C makes it suitable for a range of different application inside and outside the home.

VividIR technology on the FLIR One Pro LT helps produce clear thermographic images and videos and it even has a time lapse function to help pick up on intermittent faults. The attachment is extremely rugged and is capable of withstanding a drop of from a height of 1.8m so is therefore suited to a wide range of different working environments. It is therefore suitable for professionals and DIYers.

The following images show the range of different thermographs that can be taken with the FLIR One Pro LT: 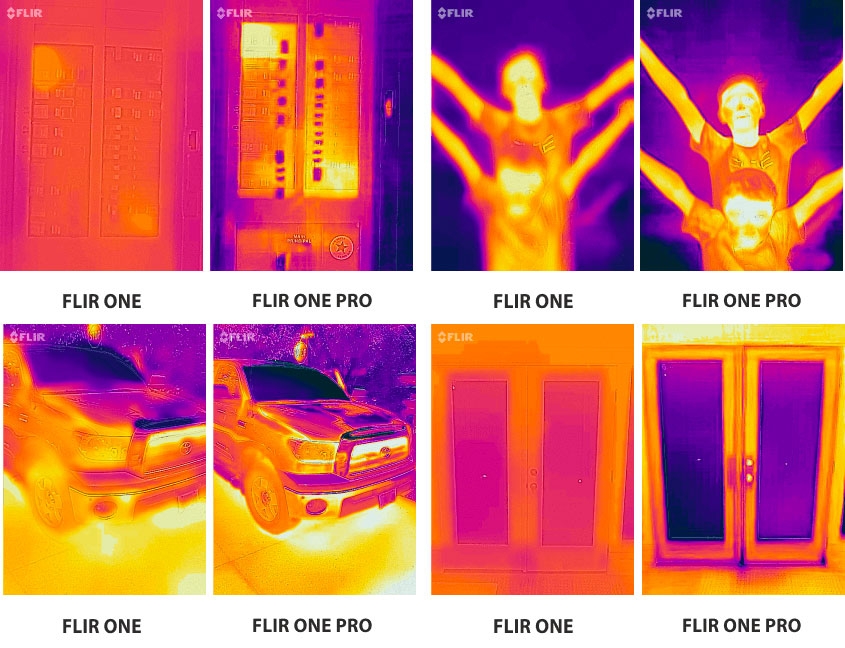 The FLIR One App - available for iOS and Android - is specifically designed for use with the FLIR One Pro LT and allows the user to make the most of its sophisticated capabilities.

The app enables the user to view up to three realtime spot meters on screen and these are movable around the screen. Up to three regions of interest can also be indicated on the FLIR One App.

Additionally, advice and tips are offered in real time to the user as they carry out thermal inspections.

An important aspect of the FLIR One App is compatibility with FLIR Tools software that enables downloading of saved images to the software for further analysis.

Finally, Apple Watches and Android Smartwatches are supported through the FLIR One App which allows the user to look round corners and see into awkward spaces.

The FLIR One Pro LT can act as a useful tool for home and building inspections, HVAC and plumbing applications, electrical diagnoses, DIY & more. Fluctuating heat patterns can indicate problems such as leaks, unfit insulation, overheating components and many other problems both work inside and outside the home. You can find some useful examples in the video tab.

The FLIR One Pro LT can be adjusted to fit on different models of smartphone thanks to the OneFit Adjustable Connector.

The OneFit is capable of extending the Lightning or USB connection by an additional 4mm and also has reversible connectors so that the attachment is always facing the right way.

Finally, the FLIR OneFit allows the user to connect the attachment to smartphones even when used in conjunction with a protective case so there is no need to compromise on protecting your smartphone.

To be compatible with FLIR ONE, a device must meet the minimum requirements