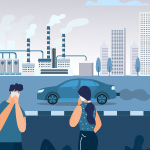 From 2017, a change in the law required the introduction of a new refrigerant – HFO-1234YF (also known as R-1234YF) – in air-conditioning systems of vehicles, replacing the widely used R134a. This has implications for automotive engineers and HVAC technicians, particularly when it comes to using appropriate gas leak detectors.

What has led to the switch?

The move to HFO-1234YF as a refrigerant for automotive air-conditioning is required by law, as set out in European Directive 2006/40/EC, published all the way back on 17th May 2006. Due to concerns about the polluting potential of vehicle air conditioning and the newly adopted Kyoto Protocol on climate change, this directive set out a number of requirements for vehicle air-con.

The European directive did not designate HFO-1234YF as the replacement for R134a. In fact, the compound did not yet exist in 2006 and was specifically developed with the legislation in mind and therefore exceeds a number of requirements set out in the regulations. It is a low-cost alternative to R134a and is largely interchangeable in the workshop although its mild flammability requires some specialist equipment.

In terms of its global warming potential, HFO-1234YF has a GWP of less than one which makes it less harmful than the equivalent mass of carbon dioxide (1 GWP) and sits well below the limit of 150. R134a, on the other hand, has a GWP of 1430. The benefits of the new refrigerant are therefore clear from an environmental viewpoint. As of 2018, it is believed that 50% of new vehicles around the world have an air-con unit using HFO-1234YF, thus making a huge, ongoing reduction in greenhouse emissions.

As HFO-1234YF is a colourless, odourless gas so it requires a detector to locate any leaks. We stock two refrigerant leak detectors that are capable of detecting the new compound: the Testo 316-3 and the TPI 753. Each of these detectors has an adjustable tic rate that allows the user to home in on the leak source, thereby pinpointing leaks in order to take remedial action.